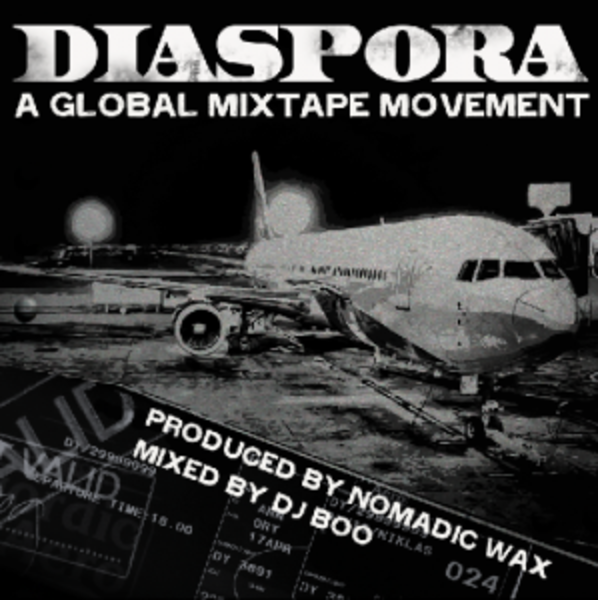 Created as en effort to expose the world to global hip-hop and urban culture and facilitate cross cultural exchanges amongst international artists, the Diaspora project features a diverse vein of some of the world’s most talented MC’s, vocalists, DJ’s and producers. The mixtape will showcase urban music from around the globe, but with a twist. Each volume of the series will highlight a different producer from around the world, and a host emcees who donate 16 bars to the project.

Diaspora uses portable digital technology and the internet as its production tools; each artist in the project records and sends their track which is then assembled and mixed by the Nomadic Wax team.

“As a record label we’ve taken a completely radical approach with this project. While other record labels are trying to find more ways to control their music and artists, we’re doing the opposite,” said Nomadic Wax Creative Director Magee McIlvaine. “Every artist that contributes a track to the collaboration will retain the same rights as Nomadic Wax to distribute, sell, and disseminate the music. In this way Diaspora is a truly collaborative mixtape and a celebration of fair-trade ideals.”

Mixed by Philippino American DJ Boo of the Juggaknots, and produced by Benny Beats of the U.S., Volume 1 features upcoming talent from Africa, Europe, North America, and Latin America, each spitting a conscious 16 bars that showcase where they are from and what they represent.

“Its easy to think of how different we are to others in the world,” said DJ Boo. “One thing that I’ve learned is that, language aside, many of our stories are more similar than different. Nomadic Wax’s Diaspora mixtape uses one of the most accessible mediums to capture that – music. Hip-hop music.”

Nomadic Wax Records
Mastering and Co- creation of the Beats