Looking for a home for this vintage dinosaur 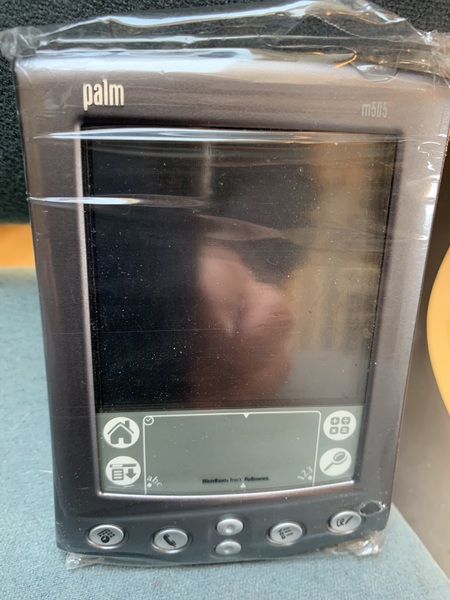 The Overview
The m505 is the latest handheld from Palm Inc. and is the first to offer a color screen and an SD/MMC expansion slot. It is approximately the same size as the Palm V series but not close enough that peripherals and accessories designed for one will work with the other.

The Screen
I'm sure what everyone wants to hear about first is the color screen. Unfortunately, everything people have been saying about the pre-release models is true. In normal room lighting, without the sidelight, it is dim and the colors are weak. There is no way to adjust the contrast.

Also, it still has the infamous black grid between all the pixels, though it might be better described as a gray grid. It isn't anything like as bad as it is on some other color Palms.

But the news isn't all bad. The colors are great and, in general, the screen is perfectly viewable with the sidelight on. I suspect I'm going to have the sidelight on pretty much all the time. To take care of this, I downloaded GlowHack, which has the sidelight on by default. It can be turned off by holding the power button down.

I copied some pictures into PhotoSuite, which comes with the m505, and they looked great. Don't trust the ones that come with PhotoSuite; their picture quality isn't very good.

If you had problems with previous color models because they washed out in sunlight, you will love the m505. It's screen only looks better as the ambient light gets stronger. It never looked better than at noon today outside in a parking lot.

Just to make sure I touch all the bases, I'll say that the m505 has a reflective screen that displays 65,000 colors. The sidelight lights up the Graffiti area.

The SD/MMC Slot
Palm has taken a page from Handspring's book and added an expansion slot to its latest model. However, at least until next Fall, the SD/MMC slot can only be used for memory expansion. The SD Association is still finalizing the process whereby input/output devices like modems will use the SD slot so we'll have to wait a while to use this slot for anything else.

When an SD card card is inserted into the m505, it automatically wakes up. In the default Launcher application a new category is created named the same name as the SD card and all the applications on the card are listed. Databases are not shown.

The m505 doesn't directly run applications off an SD card but it pretends to. When an application on an SD card is tapped on, it is automatically copied into RAM and run from there. This takes a second or so, depending on the size of the app. The app runs normally from RAM. When the app is exited, it is deleted from RAM.

It probably works the same way for MMC cards but I am doing this testing with an SD card so that is all I can say for sure.

Palm applications will have to be modified by their developers to be able to use the expansion slot to store their files. Unless they are, the application simply doesn't have any way to access the contents of the card. The apps that were bundled with the m505, Documents to Go and PhotoSuite, have been so modified. The default Launcher doesn't seem to have any way to move files, only applications.

The Battery
If I'm going to be running the sidelight all the time, battery life becomes even more important. When I first got the m505 about noon today, I immediately began charging it. It went from telling me it was almost out of power to a half charge in fifteen minutes or less. It was totally charged in an hour. I've been using it for five hours straight and running the IR port for a good part of that and it is down to 40% of full charge. This is with the side light on the entire time.

So far, that seems like a decent lifespan to me, considering on a normal day I use my Palm less than a hour, some days much less. I'll report back later on how long it took to run the battery completely flat.

The Processor
The m505 runs a 33 MHz Dragonball VZ processor. Basically, everything I tried to do was pretty much instantaneous. I can't ask for any more than that.

The Alarms
The m505 has three different types of alarm that can be used in any combination: sound, vibrate, and flashing LED. In Date Book, the sound is the standard Palm beep but in the Clock app alarms can be set to play several irritating tunes guaranteed to wake you up.

The vibrating alarm is a nice addition for anyone who doesn't want everyone in a meeting to know he just got reminded of something. I guess I'm not the person the flashing LED alarm was created for. I don't think I'd notice it under any circumstances.

The type of alarm is set globally. If you say you want a vibrating alarm, all your alarms will vibrate. I'd like to be able to set which type of alarm I get for each event. For example, I'd like to be reminded that David Letterman is coming on with a silent vibrating alarm so it doesn't wake up my wife. But the next morning I want a nice loud reminder of my 9:00 am meeting.

Alarms have a snooze button which is always for 5 minutes. During the snooze delay, a small asterisk blinks in the upper lefthand corner of all apps.

The Body and Stylus
The housing is mostly metal with a plastic strip all around the outside where the channel slots are. It certainly feels solid. In fact, it feels about as heavy as my IIIx, though Palm says the m505 is an ounce lighter. It certainly doesn't feel as light as the m500, which almost floats off my hand. While it is a tiny bit thicker than the m500, I couldn't really feel a size difference between them.

I wish I understood why Palm made the left channel slot smaller than the right. I can't see a reason for this. I feel sorry for all left handed Palm users because this is really going to inconvenience them.

The m505 holds its stylus really tightly. Really, really tightly. I darn near bent my thumbnail back getting it out the first time. Still, everyone who has every lost a stylus this way should be happy. And I'm sure it will loosen up with frequent use.

The stylus itself has a metal shaft with a plastic top and bottom. It has a handy reset pin under the top.

The Flip Cover
The m505 comes with a leather (or leatherette, I can't tell) flip cover. It goes into the right channel only after great force. I thought for a while Palm had made some horrible design error and the cover didn't fit right into its slot. Then I got irritated and shoved it into place and it finally slid home.

I do like the fact that the flip cover can fold around all the way around to the back. This was one of the few things I really didn't like about my IIIx.

The expensive-looking leather flip cover goes well with the expensive Palm. However, it is a bit thick and heavy for what it does. I'd prefer a nice light plastic one that weighs half as much. It would also be nice if someone made one that had some SD card holders in it. I predict a busy market for third parties selling replacements.

The Universal Connector
One complaint that Palm users have shouted from the hilltops is their frustration every time Palm releases a new model and they have to buy all new peripherals if they want to upgrade. Palm promises this has come to end... next time. The m505 once again has an all new shape requiring all new peripherals but Palm is vowing to continue using this shape for at least two years on all its models so most peripherals will be guaranteed to last for at least that long.

On the bottom rear of the m505, where on previous models was a serial port, is the new USB port. OK, it isn't actually a real USB port but it isn't exactly a serial port any more either. I'm not sure what to call it. Palm handily solves this problem by never referring to it at all in their rather sketchy in-box documentation. Anyway, just on either side of it are some small clips that must be intended to help hold clip-on peripherals.

The other part of the Universal Connector is two small intentions on the middle back of the m505 clearly intended for clip-on devices to use to attach themselves to the handheld.

The Cradle
The m505 comes with a newly redesigned USB cradle. It holds the handheld fairly tightly and the m505 must be inserted and removed in a specific way for it to make a proper connection. This is a bit of a pain but not anything that won't become second nature in a few weeks.

Near the USB plug at the end of a long cord is a power plug where the cradle is plugged into the wall. This gives sufficient room for the cradle to be able to reach both the computer and a wall socket.

I wish I could tell you if the m505 HotSynced any faster than its predecessors with its new USB cradle but I don't have a USB port on my computer. Until I can get my hands on a serial cradle I'm going to have to depend on the infrared port on my trusty PowerBook.

The Conclusion
All in all, I have a pretty positive view of the m505 after only owning it for about 6 hours. Yeah, the screen isn't as bright and clear as the one on my laptop, but the m505's battery life and portability means my laptop is going to continue to sit on my desk just like it has since I got my first Palm. 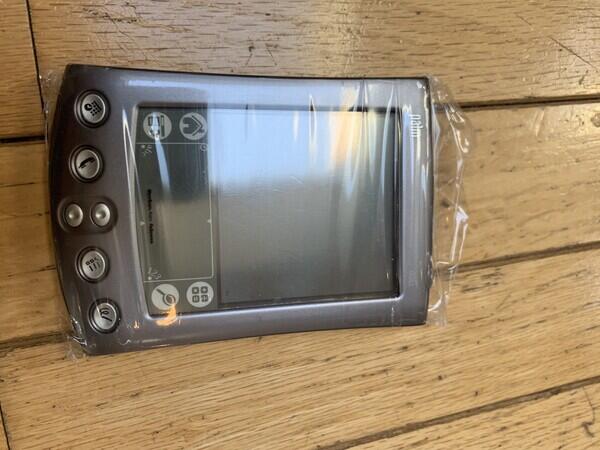 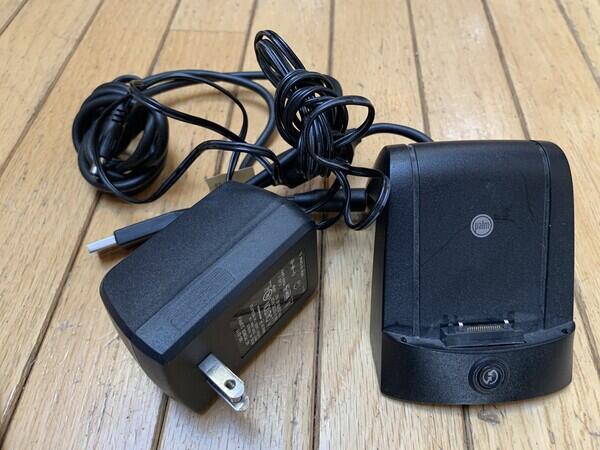 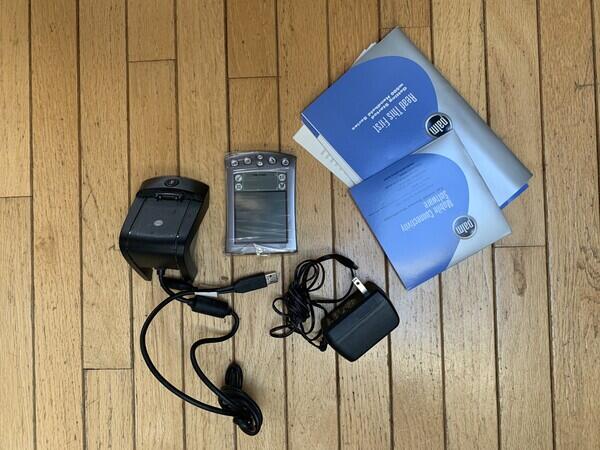