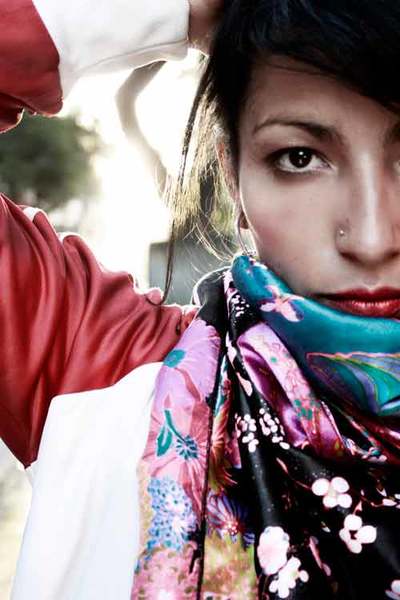 Born Anamaría Tijoux in Lille, France in 1977, Anita is the daughter of a French mother and Chilean father who was in political exile during Pinochet’s dictatorship. She became famous in Latin America as the female MC of the late 90s hip hop group Makiza, a group that received wide approval from audiences not associated in just hip hop culture due to their evolved production and lyrics. Anita decided to take a sabbatical from music and went back to be with her family in France. But she couldn’t stay away long, and in 2005 was back in Chile with her old group releasing their third critically acclaimed album, Casino Royale, after which she soon began working on a solo album as well as collaborating with groups from all over the globe such as Control Machete, Bajofondo Tango Club, and Funk Como Le Gusta. In 2006 she crossed over to the Latin mainstream pop due to her collaboration with Mexican songstress Julieta Venegas in the radio hit “Eres para mí”, while at the same time releasing her first solo album, Kaos. She was nominated to the 2007 MTV Latin awards for Best New Artist and Best Urban Artist, as well as for her duet with Julieta. Her latest work, 1977, will be her first album released in the US, this April on Nacional Records.