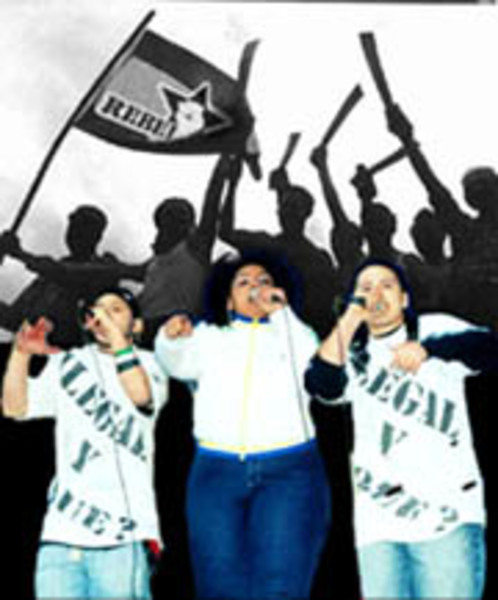 Rebel Diaz came together at a critical moment in U.S. history. In early 2006, as Latinos throughout America found themselves under attack with anti-immigration laws, Rebel Diaz was in the streets of The Bronx, New York, organizing the community to fight against proposed racist legislation. As a result of strong activist work throughout the United States, Rebel Diaz was invited to perform their revolutionary music at the historic immigrant rights march in New York City in front of 500,000 people, who cheered loudly as they demanded power to the people and an end to immigrant scapegoating for America’s economic ills. In the months that followed, Rebel Diaz performed in front of hundreds of thousands of people in massive protests from Chicago to Washington D.C. The opportunity to speak to the masses is a direct extension of their political work in the South Bronx as well as their experiences growing up in Chicago as the sons and daughters of revolutionaries.The Afro-Boricua sister Lah Tere, with her powerful voice and sharp lyrical prowess, grew up in Chicago’s historic Puerto Rican community of Humboldt Park. The daughter of revolutionary educators and survivors of Chicago’s notorious ghettos, Lah Tere’s soulful sound recalls memories of Iris Chacon, Jill Scott, and La Lupe. Years of fronting a successful Salsa band while still in high school, along with her street credibility as a lyrical force to be reckoned with, have prepared Lah Tere for the even bigger stages still to come.Lah Tere’s co-conspirators, Chilean brothers RodStarz and G1, round out the trio that is Rebel Diaz. Raised on the north side of Chicago by Chilean political exiles, a young RodStarz stayed off the streets by focusing his energy on breakdancing with the legendary Champions crew. It was only natural for him to proceed to begin rocking mics, beginning as a successful battle MC, and developing into a powerful songwriter of razor sharp lyrics filled with incisive social commentary. RodStarz’ love of Hip-Hop culture was passed down to his younger brother G1, who began producing while living in the slums of his parents’ native Santiago, Chile during his teenage years. Combining elements from the Dirty South to South America, G1’s hard-hitting soundscapes and catchy songwriting is the perfect backdrop for RodStarz and Lah Tere’s important message.Using the power of hope and the struggles of the past as inspiration, these sons and daughters of revolutionaries express their wishes and demands for a just and compassionate world. In the streets of every ghetto across the world, one can hear the sound of people fed up with poverty and second-class citizenship. Rebel Diaz arises from these conditions to fan the flames of change through songs that inspire, educate, and celebrate life.