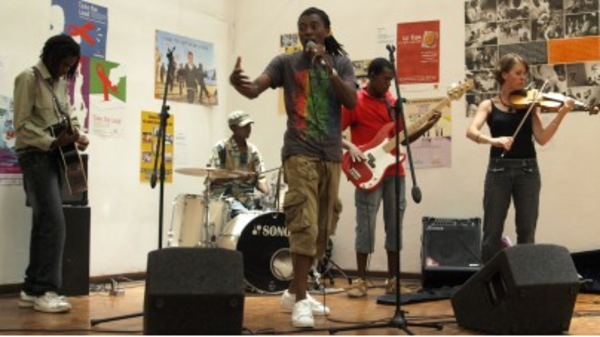 OutSpoken and the Essence (Zimbabwe)

Tongai Leslie Makawa, known in the emcee and spoken word circles as Outspoken, is a very deep man. He is a regular entertainer at a number of joints in Zimbabwe’s capital, Harare, and also in neighbouring South Africa. His music is full of hard-hitting words, usually referred to as conscious lyrics.

On his MySpace page Outspoken says his influences are life, sound, light, love and existence on this planet.

“Influences stretch from the mountains in Chivu, the bustling of life in Mufakose, the city sites of Harare, the oneness with the earth in Mazowe, to the break beats in Brooklyn! The soul found in my Afrikan people worldwide, the struggles against a system that refuses to give the people their freedom, the everyday race-man and the modern day slave-man. The rhythm found in every single persons heartbeat, sunlight and moonshine, star dust and land-mines blowing up limbs of minors (miners) the blinging of my bruthaz on MTV, ignorant that most of those minerals they rock should be called rubies, cuz they run deep with the colour red of my peoples blood.”

^ An intense moment. Outspoken during a performance at the Mannenberg.

“My influence is worldwide, outernational hip-hop, from afrika to all places where land has relevance! My influence is all the "little" nations being bullied by the IMF, World Bank and the World Trade Organisations. My influence be those people standing up against privatisation and capitalism at the expense of the masses! My influence is them people that believe in free education and radical change to the educational system! My influence is everyone concerned with the poison that multi-nationals off load in our backyards! My influence... can’t be contained in words!”

ZimboJam recently had a chat with Outspoken, who shared some insights on his personal, poetic and musical life.

It was, as his poetry and music is, a lyrical journey that left us somewhat awed. Don’t be surprised if you find yourself reading and rereading certain paragraphs. We did too…

Outspoken is a collection of ideologies. I am not to be confused with an ordinary person, or rather taken as someone born of a mother and father.

Outspoken Alpha-Intellect is the last of four siblings, the first of his kind, a third of his thoughts projected from the depths of his mind. The fifth element representing the element of life, the word-thought balanced over act, Dialectrik Blue-TSU's (The Supreme Ultimate) one half!