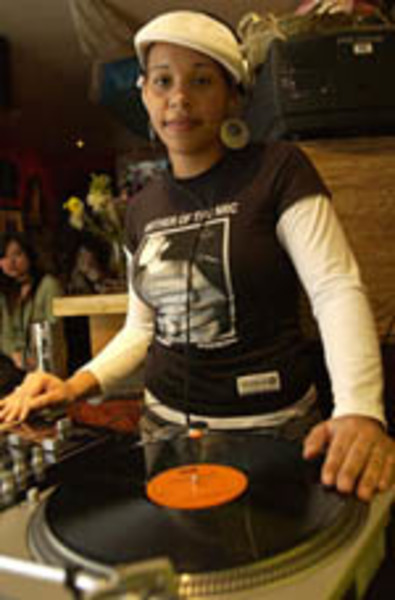 DJ Laylo is a pleasant surprise in any music scene. Her unrelenting commitment to good music and rocking the crowd has earned her a reputation for being able to give any venue a house party vibe. Born in Puerto Rico to Dominican parents, her musical selection reflects her upbringing in New York City. DJ Laylo effortlessly blends Hip Hop, Soul, Latin, House, Reggae, and Afrobeat to the delight of partygoers everywhere. She is the co-founder of Liberation Lounge NYC and has held ignited dancefloors from Berlin to Brazil and at premier New York City clubs such as Santos Party House, SOBs, B.B King's, Crash Mansion, Sutra, Southpaw, Rose Live, Sputnik, Libation, among many others. Her work in the arts and the community has been featured in The New York Times, The Source Magazine, El Diario la Prensa, XXL Magazine, among other publications. Laylo is also one half of hip hop duo Eli Efi and DJ Laylo. Blending banging beats with sharp lyrics, Eli Efi & Laylo bring forth the best of Brazilian Hip Hop. Together, they bring hip hop back to a place where MCs rocked alongside DJs to move the crowd but with an international flavor with LF rhyming in Portuguese and Laylo always finding a way to blend some Samba or Salsa into the brew. They have performed throughout the United States, Brazil, Mexico, Colombia, and Chile and have shared the stage with U.S. based artists such as KRS One, Chuck D, Styles P, Dead Prez, Talib Kweli, Jean Grae, Jeru da Damaja, Immortal Technique, Ras Kass, Lord Finesse, CL Smooth, Welfare Poets, Hurricane G, David Banner, among many others.

Also check out her Films. She's a great director as well.